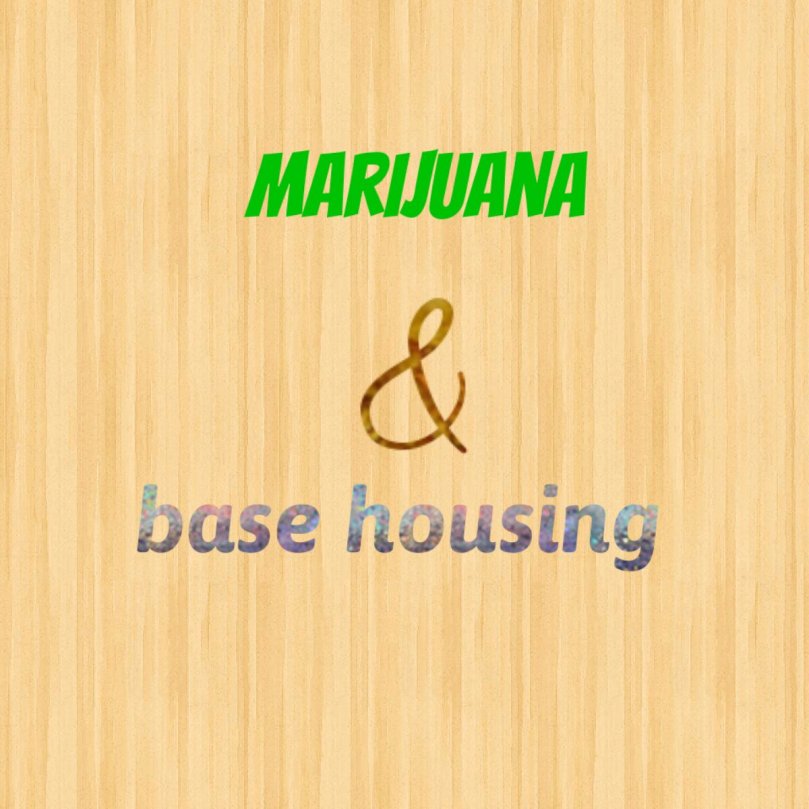 I have been thinking about this post all weekend. Thinking of how to write it. But honest it boils down to one thing.

If marijuana  is legal should it be allowed in base housing?

You see my husband and I live in base housing. It isn’t truly base housing. The Navy has a contract with an apartment to give military housing. So civilians can live here. And our next door neighbor likes to smoke pot in the garage with the garage door open.

This exposes so many people unwillingly…

We have noticed this for a while. And have made comments to the neighbor that my husband is active duty military and cannot be around marijuana.

We are an anti-marijuana household. We understand it’s legal in Washington state. And good for them. But we won’t use the drug. I don’t even care if you say it will cure my PTSD. We have an anti illegal drugs stance and marijuana is illegal to us.

I have come to call this pot smell, skunk. It smells so bad. And honestly sets off my PTSD.

I understand the neighbor has the right to smoke pot. It is legal in the state of Washington. But should it be allowed in base housing?

The official rules is no illegal drugs. But you see in the state it’s legal. But yet it’s illegal in the Navy.

If during a drug screen you pop positive you are dealt with harshly.

My husband and I are being unwillingly exposed to pot due to this neighbor lighting up in the garage with the door open.

I suppose part of me can understand not smoking it in the house. But in the garage with the door open. With children playing in the streets. The smell drifting. You are unwillingly exposing it to people.

We don’t want to be exposed to the marijuana. But even saying something to the neighbors doesn’t help. And this is the only neighbor who does this on our street. I suppose others could in the privacy of their homes. But not in their garage exposing other people.

We had chosen to live in base housing. We didn’t get house hunting leave and weren’t left with much of a decision. So went with base housing.

We would like to move but have soft orders. So to move and then get hard orders would be an ordeal.

But why is marijuana legal in base housing if it isn’t legal in the military?

Why is it okay for people in base housing to expose military members to marijuana?

What will happen if someone pops positive on a drug screen BUT it isn’t their own choice?

I realize our neighbor probably doesn’t realize the implications of their pot smoking and a military career. But they do know we don’t want to smell it.

It was actually almost a year living here before we passed a marijuana store. We hadn’t seen one. We knew they were out there… driving from the mountains we drove by one and I noticed the sign.

I’m unsure if the military took into account of the legalization of marijuana. I mean did they stop to think of base housing and someone not in the military smoking pot in an open garage. Probably not.

Stuck between a rock and a hard place.

We can’t use our garage when the neighbors are lighting up without being exposed. So we stop.

I have been trying to clean up the garage. I mean we have soft orders. So I’m tossing stuff out. Getting out plastic containers and packing up stuff. Getting ready because we know we are moving some time in the future.

But in the meantime I hope the exposure to pot will stop.

Not just for me. But for service members and children.

No one wants to be unwillingly exposed.